It has been about 20+ years since I have seen Pippin. I know we performed it in school but I can’t remember the details. I definitely opted out of the show performance but may have supported costumes. After seeing it last night at the Hobby Center for the Performing Arts, I have no idea how I processed the show as a child. There were so many abstract themes which become more clear after you actually experience life.

Hobby Center was a new experience for me. I am not sure how I managed to not make it to a show there, but it really was an excuse I can no longer use. I thought this show started at 7pm. When I arrived in the lobby at 645pm, I was surprised to learn the show started at 7:30pm. What to do with ALL this extra time? Eat!

I could not believe how many food options there were. There is also a restaurant built into the lobby. I toured the lobby choices and  was overwhelmed at the size of the desserts. The fresh pasta station. Plantain chips. I almost lost my mind. I finally had someone suggest a dessert and he recommended the tres leches. I recognized the Cordua on his uniform and I dipped in the chocolate tres leches to pass time.

I had no expectations going into the theater. I could not believe how huge it was. As I climbed to what felt like an eternity, I said very clearly to myself that I should have paid the extra $30 to sit closer.  I quickly forgot how much I needed binoculars within minutes into the show.

The only thing that I could remember were some of the songs. I kept trying to guess what would happen next as the show really felt completely different. Of course, we did not have the acrobatics and as many effects as a Broadway show, so I was delighted to feel like this was the first time seeing the show.

Pippin was actually created by Stephen Schwartz who is an alumnus of my alma mater, Carnegie Mellon (CMU). He wrote Pippin over 45 years ago. After the show, we had a talk-back where one of our alums actually had overlapping time with Stephen. Gabrielle McClinton (Gabby) who was the leading player in the show  confirmed she had workshops with Stephen during her time at Carnegie Mellon.

The talk-back was an awesome experience. I was shocked to learn that Gabby is only 26 years old. She commanded the stage as if she had decades of professional experience. She was the understudy for the show prior to gaining the part for this show. We learned about the speed she had to learn parts, dances and tricks which seemed unreal. Gabby credited CMU for preparing her for the intensity of Broadway. 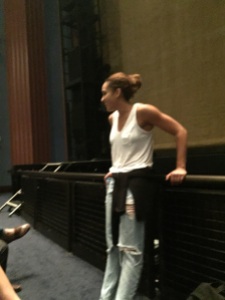 Brian Flores who played Pippin joined the talk mid-way, even though he attended the rival musical theater school (who knew there was such a thing). This was his first time performing in the tour and he also had to learn very quickly to get up to speed. They also shared the grandmother (played by Adrienne Barbeau) in the show was actually 70 years old. She was amazing and didn’t seem a day over 40.

I was blown away at my experience at the hobby center and was elated that I could get Broadway direct in Houston without having to travel to New York. I will absolutely be back and encourage anyone that can see the show before it leaves Sunday to do so (or maybe you can catch it in Amsterdam). Pippin will definitely have you thinking about your life and leave inspired.

P.S. I thought Beyonce had quick costume changes…she has nothing on Fastrada