Tradition (queue music from Fiddler on The Roof), is the first thing that comes to mind when I think of the Fisk Jubilee singers. They visited Houston this week. I forgot to RSVP for tickets at the Wortham and was very happy Wheeler Avenue Baptist Church hosted them. The performance was amazing and was a great way to end Black History Month.

Fisk was founded in 1866, six months after the Civil War.   In 1871, the singers went on a fundraising tour in Europe resulting in $50,000 which was used to build Jubilee Hall.  The singers even sang before the Queen of England which is where their picture was taken below. The last time I saw a choir perform, I was overseas. It was interesting how connected I was being disconnected from the US. I remember a strong roll of tears coming down my face as we sang the Black National Anthem. Now that I am back home, my feelings are not as strong, but my analysis of the performance had a new angle.

As old negro spirtuals were sung by the choir,  I couldn’t help but think how brilliant we are as a people. We were restricted by so many rules of what we could not do during slavery. We turned the one thing we were allowed to do, sing, to be the foundation of how we could break out of slavery. As the students sang, all I could help was decode the meaning. “Steal away, steal away, steal away to Jesus….I ain’t got long to stay here.”

We may not have much to show for our traditions due to the dismantling of our culture, I am forever grateful for oral history that has kept things apart. I am very happy I was able to take part in this tradition and share with generations to come.

As usual, I attended an artist talk without research.  I attended a private viewing of Amy Lin’s work and was pleasantly surprised. When I met her, it took me a second to realize she was the artist. Her down to earth personality was shining through the entire talk.

Each drawing is inspired by a dream she had. She recorded dreams as soon as she woke and admitted that sometimes her mind attempted to interpret the dreams while she recorded (potentially adding more than really happened). All of the work is done in colored pencil with no predefined plan. That’s what makes the work even more special.

It was interesting to see a person’s dream interpreted visually.    Many of Amy’s dreams where very different than any of the dreams I’ve had. My favorite dream was her flying a house like a kite where the strings were like cooked spaghetti noodles.  I thought I had strange dreams but Amy’s go much further, hence inspiring the beautiful art we witnessed.

The plot thickened as I learned Amy is an artist disguised as a chemical engineer. I recall my first ChE course stressed that many chemical engineers eventually practice in another field. I recall options like medicine, law, and business. I don’t recall art (or theater). Amy inspired many things through her work. She talked about turning nightmares into positive art. Perseverance and sacrifice to complete her work even while working full time as an engineer. Her life is an inspiration that you are never too old to live your dreams. Without professional art training and networks, Amy has earned a seat at the artistic table. There were many nuggets of inspiration that I took from the exhibit. I recall the first time I saw or heard Jason Moran was on Myspace. I remember being intrigued to see a young African-American jazz pianist. It was probably about 2006 when I saw his Myspace page and I do not recall going further than a brief investigation. Fast forward to today and I am extremely proud of Jason Moran and what he represents.

Being a Houston native (Third Ward to be specific) he automatically had my support. I kept hearing his name on Facebook through mutual friends, especially after the recent score of Selma. I decided that it was necessary that I learn more about him. I kept toying with whether I would attend his concert (world premier). I made a definitive decision to attend…then I decided to attend the panel event at the Menil and swap the show for my friend’s birthday dinner.

The Menil event was not what I expected. I somehow missed that Robert Pruitt was going to be on the panel with Jason. I suddenly started feeling like this was a historic moment….similar to those times my grandparents recalled when a legend came to town…and they sat this close to them. I remembered seeing my first Robert Pruitt exhibit a couple of years ago in Upper Kirby and was pleasantly surprised to learn he is collaborating with Jason.

It was refreshing to hear Jason reflect on how it is to be a Houstonian living in Harlem. Yet, in contrast, he comes home and doesn’t quite feel like an adult here. He mentioned when he comes home, it feels like being a big kid. Going to see family, grandparents, an instant reminiscence. I agreed. I especially understood how it took leaving to completely appreciate how special Houston is. From our idiosyncrasies of the paddle claps of Fiesta for the product of the day (he told a story about being mesmerized and I could relate) to the great diversity intertwined with southern hospitality. I understood what it felt like to know Houston in the 80s to what it has grown to today. Like Jason, I am still amazed that Houston is the same city I was uncomfortable visiting downtown thirty years ago.

Jason played for us and gave us some teasers of what the show would be like. Instead of leaving the Menil like my Moran fix was satisfied, he created a yearning for me to see more. I immediately went home to purchase tickets and really am excited to see the show tonight. I am not quite sure how I am going to get through the logistics of the birthday dinner and the show, but I am pretty sure Uber will be involved.

I am so happy to be a part of history and look forward to Jason’s world premier.

Houston Museum of African American Culture held an installation opening on Friday, January 30th and I was delighted to attend. I am also a member of their young professional group, Culture Cabal, and enjoyed a small VIP reception and a chance to meet the artist. I did not have a chance to research the installation much and was pleasantly surprised how much I loved it. 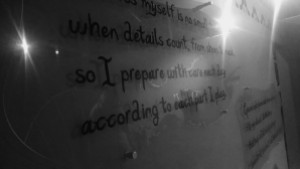 The artist, Tara Conley, was very humble and talked about how she came up with the concept for the work. Over years, she kept a journal of phrases that came to mind. After about 450 phrases, she and her friend separately came up with their favorite phrase: My life as a doll. That is where the theme for the exhibit was created.

My life as a doll explores frameworks of thoughts placed on women based on gender role definitions. It was the cutest doll house I have ever seen. I felt very comfortable yet was able to look deeper at the phrases and think about what they meant to me. Each room at the house had a different theme. I was very impressed that Tara dyed ever textile in the installation by hand (washing machine). I walked away delighted and perplexed and left to think about how I personally feed into some of the stereotypes women take on to be the “perfect doll.”

Houston’s own, Kendrick Scott, will be performing in Houston on March 7, 2015 at the Wortham Center. He is a jazz drummer that you don’t want to miss.  I have never seen him perform, but I am all about supporting local artists. There are discount tickets on goldstar which are a great deal. I have a couple of $10 off coupons the goldstar price so contact me and I will email you the code. Limited coupons so act fast.

I have heard about Phoenicia Specialty Grocery store for years but never experienced it. Yesterday, we were invited for lunch before we hung out at Discovery Green Park. I walked into the store overwhelmed. I was upset that after 6 years of living in Houston, I am just visiting. The combination of grocery, quick bites, restaurant and a performance activated all of my senses.

I ended up with a falafel plate that was just ok compared to Fadi’s. Nevertheless, I loved the ambiance, music and decor. I look forward to trying out the MKT restaurant and upcoming shows. It is definitely a must stop when you are in downtown Houston.

In addition to blog posts, there will be a static page (see menu button on top left) which will link to our public calendar of event picks. In addition, restaurant picks are listed which will change as my palate explores more of Houston’s delectable food.

Houston is growing and I am excited. With the growth comes an abundance of events and things to do. This site will serve as a way that I can organize my best picks for things to do in the city. If you attend an event and have feedback, feel free to leave comments. I look forward to exploring the city with you.